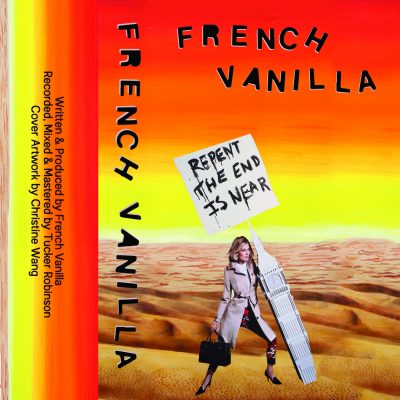 French Vanilla is a feminist art-punk band based in Los Angeles consisting of members Max Albeck (drums), Ali Day (guitar/bass), Sally Spitz (vocals), and Daniel Trautfield (bass/sax). The band is half-inspired by a desire to challenge the established Southern California music scene, which they see as dominated by a few influential male tastemakers, and half by a simple desire to hang out with friends (like Girlpool, who feature Spitz as the protagonist in new video “123” and who brought the band on tour last fall). Hailing from LA’s vibrant queer punk underground, French Vanilla delivers performances filled with infectious energy and enthusiasm and wants everyone to have fun at their shows. They regulate the dance floor with socially sensitive lyrics, vocal freneticism, punchy basslines, and catchy sax.

Out now on Danger Collective Records (Slow Hollows, Surf Curse), French Vanilla’s dance-driven debut album showcases a wide range of musical influences and social critiques. Written by the band in Spitz’s living room, these punk anthems contain elements of disco, jazz, and other genres which are energetically juxtaposed with lyrics that cover often-heavy topics. Lead single “Carrie” explores coming of age as a woman through the lens of the horror classic. Other songs delve into fear of global climate change (“Anti-Aging Global Warming”); the daily misogyny and dangers of life as a woman (“Mother’s Love,” “Heavy Handed”); and struggles with everyday social relations while promoting female empowerment (“Evolution of a Friendship,” “Honesty”). They hope to spread their message, which celebrates the generative nature of female collaboration, until all dude-rock bands cease to exist. Check out the video for “Carrie” below: