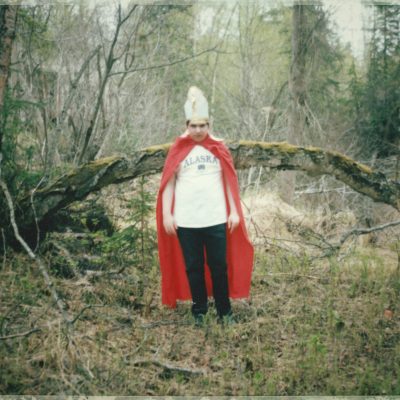 Gus Englehorn’s sophomore album may be the cutest, heaviest, strangest rock’n’ roll record that will be released this year. The Montréal-based singer-songwriter’s Secret City debut is an outsider opus that sparkles with Dadaist spirit – a playful juxtaposition of isolation, alienation, and mildish OCD. Surprising, paranoid, and studded with synths and strings, Dungeon Master is deeper than a cellar and blunter than a club – a shivering introduction to an artist who’s finally arrived. “I let my subconscious do the driving,” Englehorn admits, and as you listen to these 10 tunes, it’s difficult not to do the same: to sit back like a dog with a two-legged daydream; like a fisherwoman with her net; like a snowboarder with a mouth full of powder.

Despite a career as a professional snowboarder, for almost all of Englehorn’s life – from a childhood spent in Hawaii and Alaska and through a young adulthood as a professional snowboarder – he dreamed of being a songwriter. If he couldn’t be Dylan, maybe he’d be Daniel Johnston, or Frank Black, or maybe Darby Crash. And when he finally emerged – first on 2020’s Death & Transfiguration and now here on the 34-year-old’s label debut – he had found a sound that was dark and delightful, fun and demented, packed with dynamics and the chug of a hysterical guitar. Highlights include “Exercise Your Demons,” which explodes into a headbanging path to salvation anchored by Englehorn and partner Estée Preda‘s gnashing guitar and drum, as well as the similarly delirious, off-kilter singles “The Gate” and “Tarantula.” “Me voilà!,” he declares mid-way through the throes of “The Gate,” announcing the arrival of a singer who can coo and howl and snarl with his eyelashes fluttering.

“One of the standout albums of 2022 in terms of originality and making odd yet incredibly relatable ideas accessible through a cultural insight that only… an idiosyncratic angle can yield.” – Queen City Sounds & Art

“One of the most captivating and eccentric performers that I’ve come across in recent memory.” – Look at My Records

“The lyrics of Gus Englehorn are like snippets from surrealist short stories, the darkish DIY delivery sustaining a fantastical atmosphere.” – Atwood Magazine