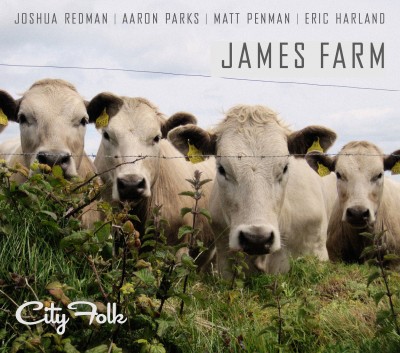 “…a model of dazzling proficiency as applied to the articulation of a mood. The stylistic palette attests to the pull of a conscientiously eclectic record collection.”
– New York Times

Nonesuch Records is set to release James Farm’s sophomore album, City Folk, next week. The album features a new collection of 10 original tunes written by all four members of the collaborative band: saxophonist Joshua Redman, pianist Aaron Parks, bassist Matt Penman, and drummer Eric Harland. Everyone in the group is a composer with equal weight and importance. Each member puts his ego aside to showcase his talent as part of a collective unit rather than as an individual. Their moniker gives credence to this unity, the first letters of their names making up the ‘JAME’ in James Farm.

Redman says, “The first record was more of a proposition, almost a question. ‘What is James Farm?’ The second record is, in a certain sense, a partial answer.” On City Folk, also self-produced, the group continues to use traditional acoustic jazz quartet instrumentation for its song-based approach to jazz and incorporates the members’ myriad influences.

“The music on City Folk is a window onto one part of our musical personalities and a step forward in terms of defining the sound of the band,” says Penman. “In general, we like to let the songs lead the way, and each of these tunes is like a mini world unto itself with its own ecosystem and hidden places to discover.”