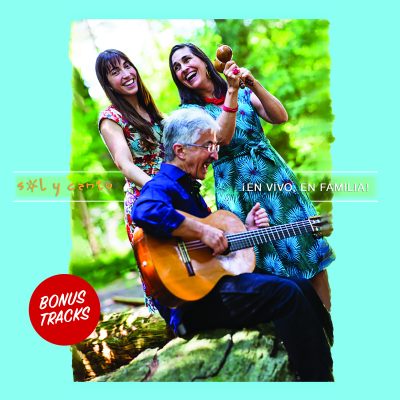 Sol y Canto’s mission is to create music and performances that move, delight, excite, and connect – connect the audience to the richness of Latin American culture; connect individuals, Hispanic and non-Hispanic, to each other through shared experience of music, poetry, humor and a joyful, playful vibe; and connect us all to our hopes and visions of a better world. Since 1994, the award-winning Pan-Latin ensemble led by Puerto Rican/Argentine singer/ bongo player Rosi Amador and New Mexican guitarist/composer Brian Amador has brought audiences to their feet from the Kennedy Center to the California World Music Festival, Boston’s Symphony Hall, Puerto Rico’s Museo de Arte and the Philadelphia

Museum of Art, as well as countless club shows and house concerts. Sol y Canto’s original songs are distinguished by poetic, often quirky lyrics set in a framework of varied musical styles with surprising twists. They can make you dance, laugh, cry and sigh all in one concert. Their arrangements of classic and contemporary Latin tunes are always fresh and original.

In October 2019, Sol y Canto made a critically-acclaimed live recording with special guest Alisa Amador — Rosi and Brian’s daughter. Released as ¡En Vivo, En Familia!, the album came out near the beginning of the global pandemic. Now, in celebration of our emergence into something resembling normality, they’re releasing three bonus tracks recorded at that time. Each offers a different perspective on the band’s unique contribution to Latin music. In Brian Amador’s arrangement of Cuban bard Miguel Matamoros’ classic “Lágrimas negras,” stunning three-part family vocal harmonies plumb the depths of a song whose tragic lyrics are often overshadowed by its playful groove. Teresita Fernández’ “Lo feo” was written as a children’s song, but its profound message and beautiful imagery make it universal. In the Amadors’ voices, accompanied by Brian’s guitar, it takes elegant, intricate and unexpected improvisatory turns. Ending the collection is the original “Love Wins,” a Motown-inflected stylistic detour celebrating our country’s belated recognition that love is love regardless of the beloved’s identity.

“Every Sol y Canto album is a demonstration of what the poet Federico García Lorca identified as ‘deep song.’ Always they evoke the sensual splendor of simply being vitally, vividly alive in a magical and mysterious universe.” -Norman Weinstein, All About Jazz and The Boston Phoenix

“Sublime ambassadors of the Pan-Latin tradition.” -The Boston Globe