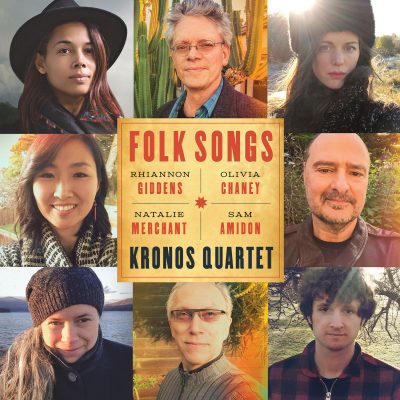 For more than 40 years, San Francisco’s Kronos Quartet—David Harrington and John Sherba (violins), Hank Dutt (viola), and Sunny Yang (cello)—has combined a spirit of fearless exploration with a commitment to continually re-imagine the string quartet experience. In the process, Kronos has become one of the world’s most celebrated and influential ensembles. The group has performed thousands of concerts, released more than sixty recordings, soundtracked critically-acclaimed films such as Requiem For A Dream, and collaborated with many of the world’s most eclectic composers and performers – including the likes of Philip Glass, Terry Riley, Steve Reich, and Henryk Górecki). Kronos Quartet has also worked extensively with a diverse set of performers outside of the classical realm, like Paul McCartney, Café Tacvba, Tom Waits, Asha Bhosle, David Bowie, and Nine Inch Nails.

When Nonesuch Records celebrated its 50th anniversary in 2014, Kronos Quartet joined forces with four labelmates—Sam Amidon, whose new LP The Following Mountain is currently at radio and has been praised by Aquarium Drunkard and the Guardian; Olivia Chaney, whose 2015 album The Longest River was picked among the years best by Uncut, The Independent, and more; Rhiannon Giddens, who Pitchfork calls “a peerless voice of roots-minded music;” and Natalie Merchant, the immediately-recognizable voice of 10,000 Maniacs and a massively successful solo artist—to perform a concert entitled Folk Songs. The group later recorded the songs, most of which are traditional with contemporary arrangements, with Doug Petty as the album’s producer. The nine tracks on Folk Songs pair these unique and soulful vocalists with the undeniable style of Kronos Quartet on numbers plucked from British, French, and American traditional songbooks.

“Though Kronos’ accompaniment is superb throughout, their arrangements are generally subtle and never upstage the singers… Folk Songs is a smart and emotionally effective exploration of the folk tradition that respects musical history without being chained to it, and it’s an experiment the Kronos Quartet would do well to repeat in the future.” – All Music Guide