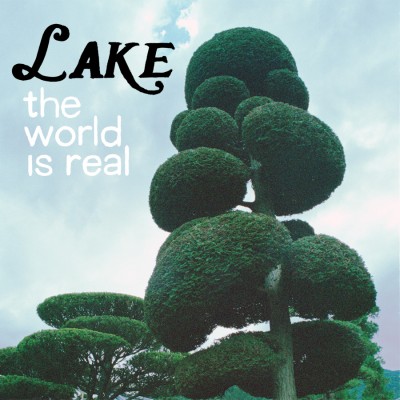 LAKE‘s comprehensive pop vision has always been anchored in an honest mournfulness, a sensitivity to nature, and the vulnerability of life. These mark LAKE‘s more downtempo, contemplative grooves, which are given their fullest voice yet on The World Is Real, LAKE‘s fourth album for K and sixth album overall. The songwriting partnership of Ashley Eriksson and Eli Moore is the locus of LAKE‘s creative engine, but the additional members are as integral and longstanding. They are the diversely talented Andrew Dorsett, Markly Morrison, and Lindsay Schief. The creative sound that surrounds LAKE is storied in collaboration, sonic adventure and an allegiance to exploring the limits of crafting pop songs. They have toured, recorded and allied with some of the most pioneering figures in contemporary independent music: R. Stevie Moore, Chris Cohen, Karl Blau, and Phil Elverum‘s Mt. Eerie, for example.

Lead track “Do You Recall?” offers wide and subtle nods to working-class 80’s classics like Mellencamp’s “Jack & Diane”, or Hornsby’s “The Way It Is”. Featuring drum machine and nostalgic guitar riffs, the lead and group vocals float through droning synths like wind to a bounded world. “Bury the House” takes its 60’s styled psychedelic setting for a playful, self-deprecating riff on LAKE‘s own new age-y ideals: “Bury the house / under the garden / make an attempt to go outside.” Album stand out, “Dog In The Desert” is shaped by Eriksson‘s voice, and the dark plodding instrumentation of the song. Tellingly, LAKE enjoys to boldly tread and rework the classics in their own way, most notably in Morrison‘s smooth R&B pop seducer and first LAKE offering, “Takin’ My Time”, a direct reference to the Isley Brothers song “Caravan of Love”. “Composure” and “I Wish For You” have the pop attributes of Pet Sounds and Smile era Beach Boys faintly forlorn, but still warm and sweet.

Lovers of hybrid pop will hear the bright whirring electronic keys that notably set McCartney II apart from the rest of Paul‘s catalog, as well as the bittersweet organ and keyboard influence of Yo La Tengo, and the minimalist funk of Talking Heads on this record. However, precise comparison is difficult: The World is Real avoids easy genre comparisons. An album full of the articulation of discontent and loss, LAKE captures these emotions in tandem with the pop music joys they have so expertly reigned in for many years.