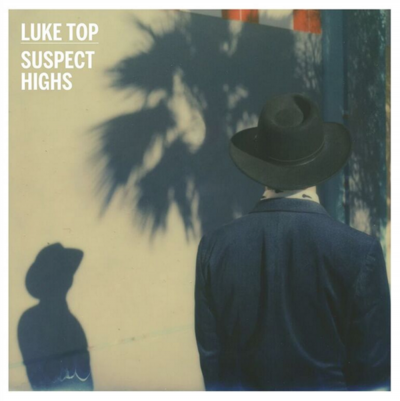 As the singer and co-founder of Fool’s Gold, a band that has been blending African dance music and New Wave pop stylings since 2009, Luke Top has achieved international acclaim and toured all around the world. He’s also collaborated with an impressive array of artists including Papercuts and Cass McCombs. Yet on Suspect Highs, Top turns inward. Self-produced during a period of relative isolation after several years of touring and being in bands full time, the LP is his most personal collection of songs to date.

Though there are subtle parallels to the world music touchstones of Fool’s Gold, such as the Ethiopian-inspired groove that propels “On the Shore,” Top has crafted something wholly new with Suspect Highs. The album touches on a variety of different styles and rhythms, with gentle, lilting waltzes like “Marble Floors” and “Chariot” situated next to the sullen, Western-evoking “Head For The Grass” and the garage pop backbeat of “Lucky Penny.” Over the course of the album, Top employs his trademark melismatic croon to deliver pensive, introspective lyrics over his lush arrangements. On “Marble Floors,” he asks, “Do our dreams make us whole? Are we on this Earth to be sold?” while on “On The Shore“ he says he’s “ready” to embrace positivity. That song, according to Top, explores the idea of “breaking away from that mental state where fear and complacency start to feed into each other to create a corrosive worldview.” He credits it as the inspiration for the entire project, as it “led [him] on the path to creating [his] own album.” The result stands out as a singular offering of gorgeous, compelling chamber pop.

“‘On the Shore’ makes us feel so freakin’ chill. Picture beads of condensation dappling that piña colada glass as you squint into the sunset.” -Noisey

“Considering the crises and calamities poisoning worldviews everywhere, ‘On the Shore’ is a welcome hedge against the madness. Breathe deep and enjoy.” -Buzzbands