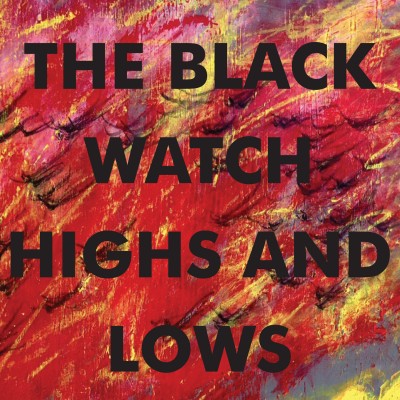 Highs and Lows, the 19th album from Los Angeles’ venerable the black watch, documents a long-running band that has been rejuvenated by new members and inspirations. Songwriter John Andrew Fredrick, who has helmed the cult favorites since 1987, didn’t intend to so quickly follow up the 2015 black watch LP Sugarplum Fairy, Sugarplum Fairy. That record was intended as his final album, to cap a career about which Trouser Press said, “Frederick and his cohorts have become experts at straining influences – mostly ’80s British guitar pop, with a sprinkling of Dylan and Velvet Underground – through a distinctive sieve, making warm, melodic music that tweaks the mind as much as the heart.” After Sugarplum Fairy, Frederick returned to his other creative career – writing comic/literary novels – but was pulled back to his musical passion project after meeting two new collaborators, producer Rob Campanella (Brian Jonestown Massacre, Beachwood Sparks, The Tyde) and lead guitarist Tyson Cornell, who joined bassist Chris Rackard and longtime drummer Rick Woodard to help Frederick create Highs and Lows. “When [Campanella and Cornell] got together and started conceptualizing, they were these complete and total Mad Hatters, daring one another to go deeper into inner and outer space,” Frederick says.

Highs and Lows begins with “Beautiful Sleeper,” a hauntingly poignant and personal acoustic number that serves as a segue to an album that blends fuzz with jangle to create a muscular but subtle version of dark, dreamy pop. Tracks like “Quondam Redhead,” “Pershing/Harvard Square,” and “She’s a Mess” are packed with sticky, winding musical hooks that support Frederick’s literate, lyrical, wry, and world-weary observations about life and love. The band chose to intentionally under-rehearse for the sessions to best capture the excitement and intensity of their new musical bond, and this gives a freshness to the proceedings that belies the band’s long history. It may be the best record the black watch has ever released.

“Probably the best thing we’ve heard this year from an artist who calls Echo Park home… the album sounds like the holy union of Guided By Voices, the Wedding Present and any number of New Zealand pop heroes (David Kilgour, et al)… Immediate, honest and just-enough lovingly rough.”-Buzzbands

“Masterfully created songs, brought to perfect auditory life by producer Rob Campanella. On record, the black watch rarely dips in quality, but the most amazing thing, as exemplified by Highs and Lows, is that it keeps topping itself.”-Blurt Online