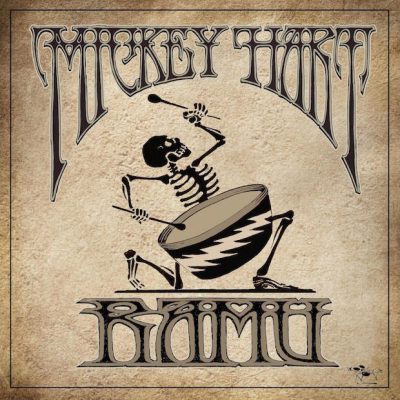 A Rock and Roll Hall of Famer and one of Rolling Stone’s “100 Greatest Drummers of All Time,” The Grateful Dead’s Mickey Hart is an accomplished writer, painter, musicologist, and expert on the history and mythology of drums. He’s won World Music Grammys for his percussive albums Planet Drum (1991) and Global Drum Project (2007); recorded vibrations from the Golden Gate Bridge; curated a border-crossing collection for Smithsonian Folkways; and produced compositions with data collected from stem cells and heartbeats. Forty-five years after the 1972 release of his first LP without the Dead, Rolling Thunder, Hart is now releasing his 14th solo release – RAMU. RAMU was co-produced by Michal Menert,​ ​formerly of Pretty​ ​Lights​, and features Avey​ ​Tare​ of​ ​Animal​ ​Collective and Tank​ ​(from​ 2017 Tiny Desk Contest winners ​Tank and​ ​the​ ​Bangas)​ as guest vocalists. In addition to their contributions, RAMU features the incredible Zakir Hussain​ on tabla, bassist Oteil​ ​Burbridge​, talking drum master Sikiru​ ​Adepoju​, guitarist Steve​ ​Kimock, multi-instrumentalist Charles​ ​Lloyd​, and​ ​Jason​ ​Hann​ ​of​ The ​String​ ​Cheese​ ​Incident; it also includes previously-unheard recordings of the late Jerry​ ​Garcia,​ ​the late Babatunde​ ​Olatunji,​ ​and unreleased field recordings captured by Alan​ ​Lomax.

Recorded at Hart’s Studio X in Sonoma County, the album is named after Hart’s Random Access Musical Universe –  a musical database with analog recordings of instruments, digital loops and samples, and sonifications of things like the cosmos, plants, and brain cells. He’s been collecting these “musical universes” for decades, and eventually made RAMU into a tactile instrument  with knobs, faders and pedals. “It’s a very powerful compositional tool,” says Hart. “It’s vast, it holds new treasures, and it’s still revealing itself to me… Every place you turn, you find interesting stuff—music is endless, just as RAMU is.”  This is, thus, the foundation for the RAMU album: the vast world of recordings in the database, and the infinite possibilities the instrument has for building upon them.  During the time that Hart was working on the album, he was also forced to confront the changing political climate. “I hadn’t been looking at politics specifically,” he says, “but after [the 2016 US presidential election], things took a new turn…The record is largely dedicated to Mr. Trump. He’s a great inspiration—every time I think of him, I write things. I can’t tell you how loud I’m screaming and, as a musician, this is how we scream—to shine light on things that are dark, and shine some understanding on life and this horrible human being leading our country.”

“When talking about the most influential world-music recordings of the last 30 years, Mickey Hart’s Planet Drum surely belongs in the same conversation as Paul Simon’s Graceland or the Ry Cooder-produced Buena Vista Social Club… [It] inspired a wave of would-be percussionists to take up an instrument. As big-name drum circles go, this one will never be topped.” -Relix

“A hybrid of the highest order.” -Variety

RIYL: Animal Collective, Tank and the Bangas, The Grateful Dead, The Avalanches, Gorillaz