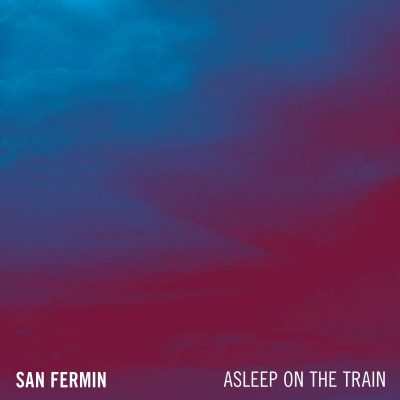 Produced by bandleader Ellis Ludwig-Leone and brought to life by his fellow performers—lead vocalists Charlene Kaye (KAYE) and Allen Tate, trumpet player John Brandon, saxophonist Stephen Chen, violinist Rebekah Durham, drummer Michael Hanf, and guitarists Tyler McDiarmid and Aki Ishiguro—San Fermin‘s 2017 album Belong is a warm, intoxicating LP. It arrived after two previous San Fermin albums as well as solo efforts from both KAYE and Tate, sold-out performances worldwide, appearances at festivals such as Lollapalooza and Austin City Limits, and tours with the likes of St. Vincent, The National, Arctic Monkeys, and alt-J. Though the record features more inward-facing lyrics than San Fermin’s previous albums, it is musically ambitious; according to NPR, “Listening to Belong is like opening a fire hydrant that sprays big, bold sounds and ideas.”

Now, the band has released a lush, gorgeous outtake from the Belong sessions, entitled “Asleep on the Train.” According to Ludwig-Leone, “this song is a b-side that I’ve always liked, but it didn’t quite fit on the record,” says bandleader Ludwig-Leone. “The intro starts with kind of train whistle sound, and then the sax and violin come in with this chugging sound that inspired the lyrics to the song. The lyrics are inspired by late nights on the subway, all flickering fluorescent lights and post-party depression.” Featuring dual vocals from both Tate and Kaye, “Asleep On The Train” is a worthy addition to the San Fermin catalogue and should sound great live during the band’s shows this October.

“This grand, Brooklyn-based troupe has no shortage of music to share. Now that the band has captivated you with enchanting harmonies and dynamic instrumental variety in their newest album, you can now hear one of the b-sides.” -Paste