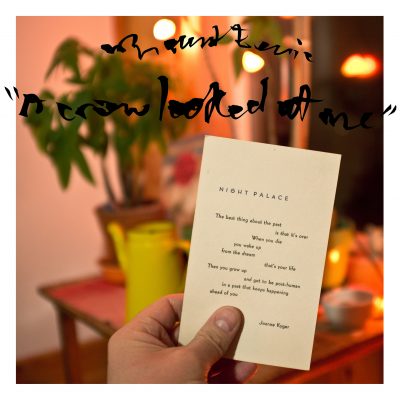 Phil Elverum started releasing music as The Microphones more than two decades ago, finding critical acclaim under the umbrella of K Records (which released The Glow Pt. 2, named the best album of 2001 by Pitchfork) before changing his moniker to Mount Eerie. Elverum left K Records and began releasing everything himself, building a self-contained small town operation in Anacortes, Washington called P.W. Elverum & Sun. Radical self-sufficiency has been a theme and obsession of Elverum’s work; as such, shows have always been all ages and never booked through a manager agent, and albums have always been self-recorded and hands-on. Mount Eerie’s albums have always aimed to push into new territory, both in sound and idea, but the thread of Elverum’s voice – soft and human amid the wide range of textures and worlds – has remained constant throughout, Often the lyrics have attempted to grapple with big questions, the briefness and the smallness of human life being a running theme.

Yet A Crow Looked At Me is unlike anything else in the Mount Eerie catalog in its unvarnished, metaphor-free expressions of true personal devastation. In 2015, just after giving birth to the couple’s child, Elverum’s wife – the French-Canadian cartoonist and musician Geneviève Castrée – was diagnosed with pancreatic cancer; she died a year later.  Elverum wrote and recorded the album throughout the fall of 2016 in “the big empty room on the second floor,” where Geneviève died, penciling the words on her paper and playing her guitar, her bass, her pick, her amp, and her old family accordion. Inspired by Karl Ove Knausgaard, Julie Doiron, Gary Snyder, Sun Kil Moon, Joanne Kyger, and Will Oldham, the songs are stuffed with brutal details — from the hospitalizations to the grieving and the specific domestic banalities that become existential in the context of such huge and abrupt loss. These songs are not fun. They are pretty and they are deep, steeped in a love that prevails beneath the overwhelming sorrow.

“A Crow Looked At Me is not only a stark portrait of grief but also a love story of 13 years… This is Elverum at his most direct, his words spilling out like scribbles on note paper, held together by his unique guitar style that layers rhythms on one another to disorienting effect. …Elverum carries an unbelievable weight, and you can hear it: You can hear the room, you can hear the sacred reverie in how he plays Geneviève’s instruments.” -NPR’s First Listen

“10/10. A Crow Looked at Me is a masterpiece in the manner of [CS Lewis’] A Grief Observed and [painter Brian Kershisnik’s] ‘She Will Find What is Lost.’ All of these works create a special communion between creator and observer, artistic experiences that join individual circumstances of loss with whatever the listener/reader/viewer brings to the work… They prepare us for times to weep and mourn, which will surely come…These works of art help us to examine life and death, even as the questions wound.” –Popmatters