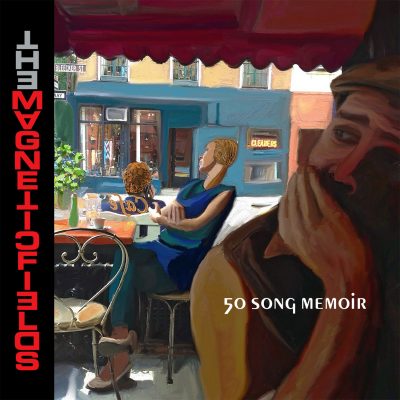 Stephin Merritt has one of indie rock’s most distinctive voices, a deadpan bass tone that features prominently on the eleven albums he’s written and recorded as The Magnetic Fields. Merritt has also released albums under his own name as well as with the 6ths, the Gothic Archies, and Future Bible Heroes; composed original music and lyrics for several music theater pieces including an Obie Award-winning off-Broadway stage musical of Neil Gaiman‘s novel Coraline; and crafted songs and background music for the first musical episode of public radio’s This American Life. Yet he’s best known for his work with The Magnetic Fields, most notably the popular and critically-acclaimed 69 Love Songs on Merge Records, a brilliant and expansive three-part concert album that made Pitchfork’s Top Ten Albums list in 1999 and has since been cited by Rolling Stone and NME among the greatest albums of all time. Merritt began recording The Magnetic Fields’ newest concept, the five-disc 50 Song Memoir, on his 50th birthday: February 9, 2015. Unlike his previous work, the lyrics on 50 Song Memoir are nonfiction—in Merritt’s words, “a mix of autobiography and documentary” chronicling a half-century of living. In addition to providing vocals on all 50 songs, Merritt plays more than 100 instruments – ranging from ukulele to piano to drum machine to abacus.

The album comes in concurrence with an ornately-produced tour directed by the award-winning Jose Zayas (Love in the Time of Cholera, Aunt Julia, and the Scriptwriter). In concert, the music will be played and sung by a newly expanded Magnetic Fields septet in a stage set featuring 50 years of artifacts both musical (vintage computers, reel-to-reel tape decks, newly invented instruments), and decorative (tiki bar, shag carpet, vintage magazines for the perusal of idle musicians). The seven performers each play seven different instruments, some of which are traditional (cello, charango, clavichord) and some which were invented in the last 50 years (Slinky guitar, Swarmatron, synthesizer).

This servicing includes 16 selections from 50 Song Memoir. Sequentially arranged, these songs reflect Merritt’s intimately humorous and bittersweet takes on his childhood pet, religion, the rise of synthesizers, the AIDS crisis, media scrutiny in the Internet age, and the cultural and personal events that have shaped the songwriter over a half-century.

“[50 Song Memoir is] a surreal tale with equal bouts of absurdity, whimsy, sorrow and romance.”—Observer

“The Magnetic Fields return with a record that, like 69 Love Songs, forces [Stephin] Merritt to get focused and inspired. 50 Song Memoir is easily the best gimmick Merritt’s stumbled upon since the turn of the century… A conceptually satisfying work, spanning five discs and two-and-a-half hours without feeling repetitive or samey.” —Pitchfork