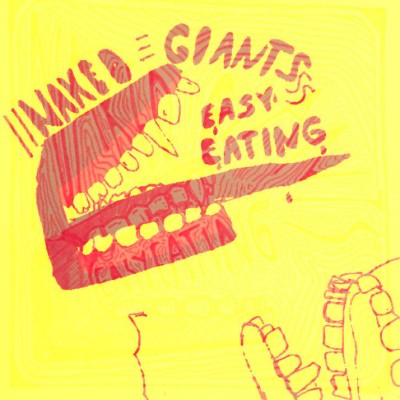 Naked Giants, a three-piece garage rock wildebeest from Seattle, combine ripping guitar solos, pounding backbeats, and juicy basslines to form a psychedelic whirlwind of fuzz. The band has taken Seattle by storm, playing to rowdy crowds at college house parties and all-ages venues on their way to finding airplay at KEXP and winning second place in the EMP Museum‘s 2015 Sound Off! Battle of the Bands. Now the band, composed of best friends Grant Mullen, Henry LaVallee, and Gianni Aiello, is taking its spontaneous rock ‘n’ roll energy on the road for a string of dates leading up to several shows at South by Southwest this March.

The band’s Easy Eating EP is its first entry into the recorded world, released just in time for the unsigned band’s tour to SXSW in March. Recorded by Dylan Wall (Craft Spells, So Pitted), the EP’s title song is an immediately-accessible blaster that rages with the intensity of youth. It is joined here by “Pyramids,” which demonstrates the band’s twitchy, frenetic energy and adeptness at crafting catchy melodies, and “Ya Ya,” a noisy guitar freakout that displays their playing prowess.

“The group revels in styles from soft psych to blistering rock in a textural landscape painted with fuzzy distortion and ghostly vocals. The catchier the tune, the more fun they sound like they’re having.”
-EMP Museum