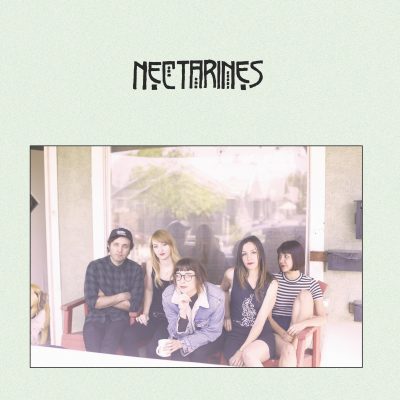 Hailing from Long Beach, California, Nectarines make slightly-gothic dream pop with a vibe that feels a bit like The Pixies on codeine. Glorious, honeyed, heavy, and rhythmic, Nectarines recall a simpler time — a time when clove cigarettes, asymmetrical haircuts, and dark fashion told you were in the right place, and then the band kicked in and there was no question. The band is led by vocalist/guitarist Nima Kazerouni of So Many Wizards, an acclaimed Los Angeles DIY institution that continues to release albums to a widening audience. In Summer 2015, Kazerouni was introduced to drummer Allie Bumstead at a local bar in Long Beach. The two forged a friendship, with Kazerouni traveling down to Long Beach from LA to hang out and jam on song ideas in her garage. During these garage sessions, the friendship continued to deepen as Allie became Nima’s dating therapist between working out the song structures and lyrics. When his relationship ended, Kazerouni solidified Nectarines by moving into Bumstead’s house; she, in turn, recruited a group of Long Beach locals to round out the group’s lineup: Corina Camacho on keys, Elise Ewoldt on bass, and Rachel Rufrano on lead guitar. A passion project born over coffee, beer, and broken hearts, Nectarines makes music for introspective dancing.

Since their inception, they’ve been turning heads from Long Beach to Los Angeles, earning a slot at last year’s Echo Park Rising festival. The band’s debut EP, which is self-titled, was recorded by Scott Barber at The Barber Shop Recording Studio (Sean Gadd, Samira Winter, Emily Lacy) in the hills of LA.

“‘Out of My World’ is a two-minute shot of adrenaline… over scratchy guitar, gliding synths and backing vocals, and agitated rhythms.” -Buzzbands