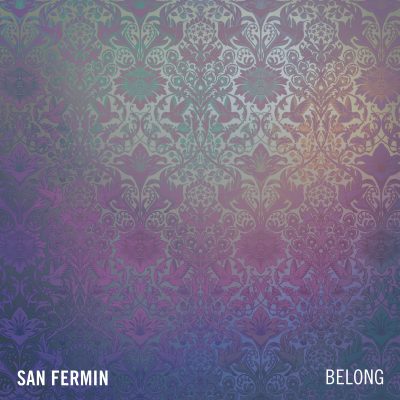 San Fermin’s new Belong LP marks a shift in songwriting perspective for bandleader Ellis Ludwig-Leone. “In the past I’d usually write through characters from books or movies, as a way to try to distance myself from what I was writing about,” says the Brooklyn-based artist. “As I’ve become more confident as a songwriter, I decided that I could drop some of the artifice and write something more direct.” In bringing a more personal slant to his music, Ludwig-Leone found himself confronting disconnection, displacement, and—perhaps most significantly—everyday anxiety. “Anxiety is something I’ve dealt with since I was a kid, but on this album I talked about it more explicitly than I ever had before,” he points out. Produced by Ludwig-Leone and brought to life by his fellow performers—lead vocalists Charlene Kaye (KAYE) and Allen Tate, trumpet player John Brandon, saxophonist Stephen Chen, violinist Rebekah Durham, drummer Michael Hanf, and guitarists Tyler McDiarmid and Aki Ishiguro—Belong unfolds in warm, intoxicating textures that both contrast and intensify that sense of unrest. It follows two previous San Fermin albums and sold out performances worldwide as well as appearances at festivals such as Lollapalooza and Austin City Limits and opening tours for the likes of St. Vincent, The National, Arctic Monkeys, and alt-J.

The album opens, appropriately, with “Open.” Over a background of looped human voices, Kaye sings about coming to terms with perhaps-unsavory desires. Kaye is also the lead vocalist on the hypnotically shimmering pop opus, “No Promises,” which deals with the fear of disappointing others; Tate applies his clear and emotive baritone to other highlights including the throbbing “Better Company,” which addresses personal insecurities, and the LP’s soulful title track. As alluded to by Ludwig-Leone, the lyrical themes on Belong are more personal and less outward-facing than the last San Fermin LP, Jack Rabbit. Yet the band remains as sonically ambitious as ever, employing its members individual strengths towards a musical maximalism that is breathtakingly thoughtful and powerful.

“Listening to Belong is like opening a fire hydrant that sprays big, bold sounds and ideas.” -NPR

“It’s hard to assign a specific genre to San Fermin, a Brooklyn-based band with roots in classical composition. The closest options — indie rock or chamber pop —don’t quite seem to capture the ambitious, lushly layered tracks that come from the group.” -Time