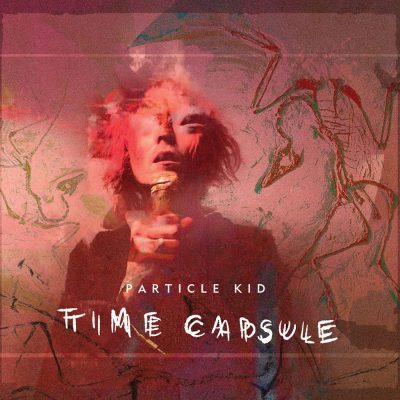 On the sprawling epic Time Capsule, singer, songwriter, and multi-instrumentalist Particle Kid (J. Micah Nelson) pulls listeners down the rabbit hole to experience the music he’s been making over the past five years. Described by Rolling Stone as a “trippy troubadour” and a “musical polymath who combines an indie DIY aesthetic with a questing hippie spirit and a relentless work ethic,“ Particle Kid is a constantly absorbing and evolving musician who has both musical DNA and professional experience backing Neil Young (along with his brother Lukas Nelson & Promise of the Real), collaborating with John Doe, Tinariwen and the Flaming Lips and working on his own projects like the psych-punk orchestra Insects vs. Robots. Micah’s dad, Willie Nelson, helped name his band: Micah rolled into the house one day and Willie meant to say, “Welcome home, Prodigal Son!” but he had just burned a fat one and it came out as, “Welcome home, Particle Kid!” instead.

The new album takes listeners on a nearly two-hour trip through various genres, ideas, and sounds, creating an eclectic palette of sonic colors and feelings – both familiar and exploratory – painted together like a collage. It sounds as if 90s alt, 60s psych, 70s electric jazz, and some abstract future were all magazines—chopped up and somehow cohesively glued together by Nelson’s voice and lyrics. The album feels like an organic, laidback friends and family affair, with many of the guests and influences being the people he plays and tours with. “Velocirapture (The Serpent Flew),” featuring Sean Lennon on vocals, guitar and mellotron, was written while super-stoned, wide awake and daydreaming about dinosaurs. Fittingly, since this record recalls at times both Dinosaur Jr. (one of Micah’s favorite bands) and Sebadoh/Sentridoh/Lou Barlow, “Someone Else’s Dream” features J Mascis on guitar. Advance single “Along The Timey Road” is about” writing a letter to your future self and putting it inside a time capsule,” while “All One Day” and “Amerikan Lyfe” each take advantage of the family connection by featuring Willie Nelson. About the latter song, Micah says, “It was also very cool that my dad wanted to play Trigger and sing on it. It’s a notably weirder song arrangement than he’s used to and I could tell he had a lot of fun doing it. His laugh at the end was something that I immediately knew had to be the last sound we hear to end the album. It sums the whole thing up. Having these great memories with folks I love to help offset such darkness during what was an otherwise very stressful time is… a gift.” Other guests featured on the 2x LP include Sunny War,  Margo Price, The Lovely Eggs, Moskito, Jim James, Paul Bushnell, Mickey Raphael, Raman Steve, Jeremy Ivey, Eric Sullivan, The Nerfs,  Nikitia Sorokin, and Dave Ralicke.