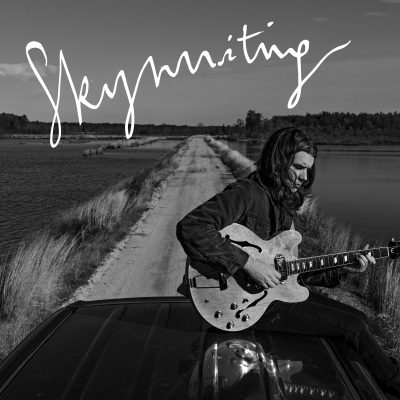 Zachary Cale, whose seventh full length Skywriting is available from ORG Music, has been a fixture of the underground music scene in New York City for over 17 years. Often cited as a songwriter’s songwriter, his eclectic musical influences have guided his own unique style of songwriting. Whether alone with an acoustic guitar in an intimate room or on a festival stage with a full band, the song itself has always been his magnetic north. An expressive singer and masterful guitarist, Cale has honed his craft over years of touring and recording. Born in St. Tammany Parish, Louisiana and later raised both in Jakarta, Indonesia and Washington State, Cale picked up the guitar at age 12 and started writing original material in his early teens. In his college years he cut his teeth in the Olympia music scene of the late 90s forming bands that explored both punk and folk sounds. Upon relocating to NYC in the early 2000s, the label New World Of Sound released his debut album, Outlander Sessions: an album consisting of intimate story songs, nuanced guitar-picking and an aching vocal delivery. Cale’s foundations were set. As a dedicated performer, in the aughts he played in numerous New York bars and venues sharing stages with other then burgeoning songwriters like John McCauley, Sharon Van Etten, and Kurt Vile. The albums that followed, Walking Papers and Noise Of Welcome, expanded on his foundations by using alternate tunings, complex finger-style guitar techniques, and highly poetic narrative song structures. By 2011, Cale was touring nationally and overseas. Blue Rider was released in 2013 to much acclaim. The album encapsulated his intimate solo performance style while the follow-ups, Duskland and False Spring, move into fuller band arrangements, showcasing the songwriter’s skill as a band leader, and his ability to meld roots influences with classic American rock sensibilities.

Skywriting takes on a new focus for the seasoned songwriter, pivoting to more of a band-focused rock album. Inspired by many years on the road, the songs that make up the album depict characters in a state of perpetual motion, or better yet a constant state of becoming. The gamble and sacrifice that one makes in pursuit of their art is felt in just about every line. Many of the songs reflect on time spent traveling between cities, being away from loved ones, introspective moments in motel rooms, green rooms, and long stretches of highway.

“[‘Bigger Picture’ is] a beautiful song… As is his usual MO, Cale expertly balances the sweetness of the music with a pinch of bitterness.” -Aquarium Drunkard