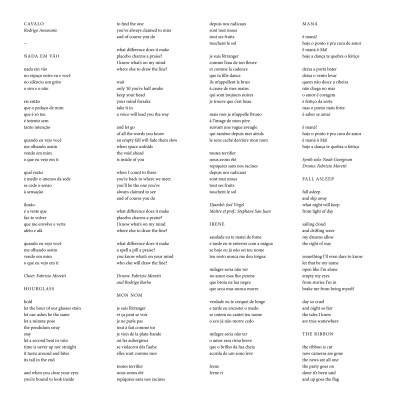 Cavalo is the stunning debut solo release by Brazil native and songwriter / multi-instrumentalist / poet / artist Rodrigo Amarante. His work can be credited back to his numerous collaborations with Devendra Banhart, the critically acclaimed Little Joy (which included Fabrizio Moretti of The Strokes & Binki Shapiro), and longtime Brazilian rock group Los Hermanos. Cavalo deems to be a diverse collection of folk melodies infused with South American psych and lo-fi haze. “Hourglass” is one of the albums many standouts which Noisey called a “charming, bouncy little track [that] recalls the glorious indie rock days of the early ’00s.” Yet, the album’s dynamic sound approaches all areas of one’s imagination, with tracks reminiscent of a slow moving rainy day and others bursting with upbeat tempos and exotic flavors. This may be derived from Rodrigo Amarante’s lyrical fluctuation between English, French and Portuguese, giving the exotic attributes a constant presence throughout the record. Other album highlights include folk ballad “Tardei” which features a star-studded lineup of vocal contributions by actress Kristen Wiig, Fabrizio Moretti, Moldy Peaches member Adam Green, Devendra Banhart, and Cate Le Bon producer, Josiah Steinbrick. It’s a song that serves as the perfect culmination to the musical journey that is Cavalo.

Rodrigo Amarante‘s debut encompasses a vast range of sound, melody, and language; ultimately manifesting in a true reflection of himself. It’s a collection of songs that are fit for any occasion, anywhere in the world.

“Cavalo will be a sparse affair featuring eerie folk ballads that could easily soundtrack a cowboy riding off into the sunset. The record is about embracing the solitude of a lonesome traveler’s life…”
– Stereogum