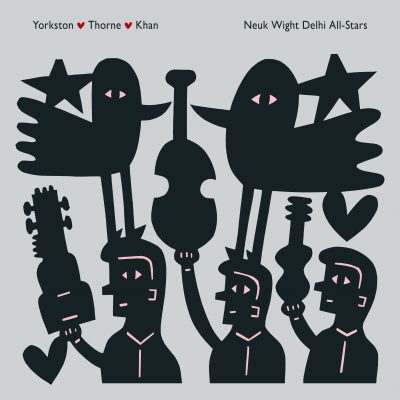 Produced by the band and recorded entirely onto tape at Analogue Cat Studios in Northern Ireland by Julie McLarnon, the new Yorkston/Thorne/Khan album represents a confluence of currents, among them the north Indian sarangi; jazz-tinged bass, reminiscent in places of Danny Thompson; acoustic guitar that owes a debt to Elizabeth Cotton, Dick Gaughan and Mississippi John Hurt; and three very different vocalists. The combination is unusual: YTK’s 2016 debut, Everything Sacred, may be the only precedent. Yet while the constituent elements might seem disparate, the new album is, if anything, even more coherent than its predecessor. It also basks in a truly magnificent title: Neuk Wight Delhi All Stars. Just don’t call it fusion. “There are elements of jazz and Indian classical tradition coming together with acoustic song,” says James Yorkston, “but the word fusion suggests forethought, an attempt to combine the most disparate elements possible, and YTK wasn’t like that… We’re pals. I just see it as a band.”

Though they released their first album only last year, the band members are hardly lacking in experience. Songwriter James Yorkston (from East Neuk of Fife)’s 2002 debut was named Rough Trade’s album of the year and he has gone on to released seven acclaimed solo albums and work with everyone from Kieran Hebden (aka Four Tet) and Hot Chip’s Alexis Taylor to Martin Carthy and Bert Jansch. The bassist and composer Jon Thorne (from Isle of Wight), who came to prominence with Lamb, has also worked with Iron & Wine, Robert Fripp, Donovon, Sam Lee, Vashti Bunyan and Green Gartside. YTK took root when Yorkston met Suhail Yusuf Khan, the award-winning sarangi player and singer (from New Delhi), backstage at a gig in Edinburgh. Khan is part of several groups including Advaita, an eight-piece Indian band recorded by John Leckie. His grandfather, Ustad Sabri Khan, played with George Harrison, Pandit Ravi Shankar and Yehudi Menuhin.  Neuk Wight Delhi All-Stars comes after a period of steady touring through India, Spain, and Ireland and reflects the confidence and increasingly fluid interplay between Yorkston, Thorne, and Khan.