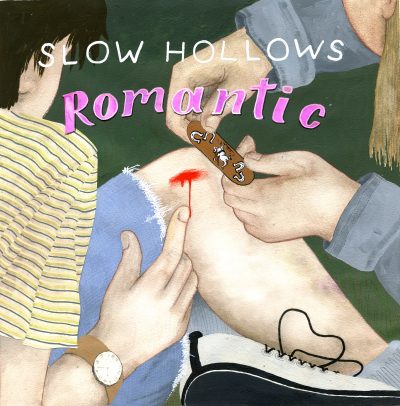 Romantic is the third album from Slow Hollows, the LA-based post-pop project of 18-year-old Austin Feinstein. Written during his senior year of high school and between his contributions to Frank Ocean‘s Blonde (on “Self Control”) and Endless (on “Higgs”), and Tyler, The Creator‘s Cherry Bomb (on “Perfect”), the LP mines 90s indie rock influences to create a lush, melancholy sound that addresses society’s romaniticization of tortured artistry. Led by vocalist/guitarist Feinstein, the band – which has played with the likes of Beach Fossils, Nothing, Twin Peaks, Spencer Moody, and Antwon – is rounded out by guitarist Dylan Thinnes, bassist Aaron Jassenoff, keyboardist Reed Kanter, and drummer Jackson Katz.

Throughout the album, virtuosic guitar work is met with maudlin horn arrangements on mid-tempo songs with timbres that match the album’s somber tone. According to an interview with Feinstein in The FADER, the jazzy “Softer” “is meant to represent the absurdity of the things that humans tend to place importance in, and how easy it is to get bogged down by a negative mindset towards all things once loved.” Songs like “Again” and “Easy” explore spiritual isolation, while “Last Dance” and the LP’s title track (featuring guest vocals from Rebecca Coleman of Pageants/ex-Avi Buffalo) ruminate on a relationship that has gone sour. Though the band is young, Romantic puts their emotional and musical maturity on full display.

“Straight-ahead hooks, charming melodies, a familiar indie aesthetic twisted into something refreshing through she sheer simplicity of the whole thing.”
-NOISEY

“The group’s crispest project yet… [Austin Feinstein is] more confident in his range and diction, able now to draw the songs around himself, rather than simply sit in the middle of them.” -Eleven PDX