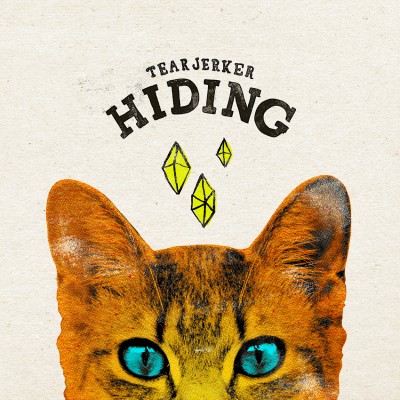 Toronto-based band Tearjerker was born from the shared mindset that allowed for each member to play an equal part in the creative process. Since 2009, the band has released two albums, an EP, a few remix projects, and a handful of singles, completely independently. Their latest is called Hiding. The gauzy, surging, shoegazy EP was written and recorded in the musicians’ homes in Toronto. Much of the music was recorded separately, in solitary circumstances, and then brought together to create the sprawling, layered melodies.

“‘You Can’, by the Toronto trio Tearjerker, is less of a ‘song’ than a blissful loop, a freeze-frame on a perfectly symmetrical five-note melody. After some sputters and coughs, the transfixing loop kicks in – it’s a soccer chant, something huge and relentlessly simple designed to ripple out over festival masses. Hear it once, and feel it become part of your under-the-breath murmuring for the rest of your day. The band seems to know they’ve designed a lethally powerful hook, so they reinforce it with keyboards and a guitar, pumping it full of air until it takes to the sky, a great big orange blump floating overhead. It’s all peak, the blissful climax of an Explosions in the Sky song snagged in a processor and repeating. Their EP Hiding will be out May 20.”
– Pitchfork