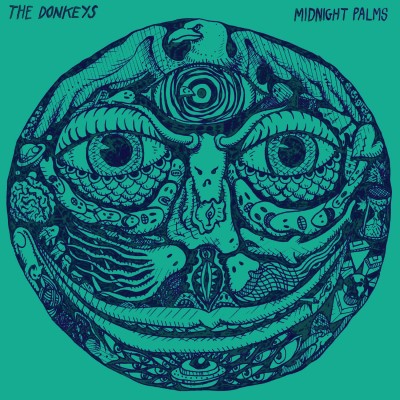 With Midnight Palms, The Donkeys present a fine, half-sized document of their singular sound.  At once accessible, adventurous, nostalgic, and progressive, the five-song mini-album oozes with the sticky, palpable energy of a band fresh off the road and in rare form. Tracked largely live-in-the-studio with veteran producer Thom Monahan (Vetiver, Fruit Bats, Devendra Banhart), Midnight Palms was recorded at the end of a Blitzkrieg road run and possesses a lived-in feel that won’t surprise fans of 2014’s Ride the Black Wave – an album which, according to AllMusic, is capable of making listeners “feel like they’ve been laying out in the sun all day, warm in the glow of The Donkeys’ heartfelt love for all things Cali.”

The new collection picks up where Tim DeNardo, Anthony Lukens, and Sam Sprague left off, conjuring an easy-breezy feeling on songs, like single “Down the Line,” that Paste Magazine likens to “the sonic equivalent of aimless driving through the Hollywood Hills.” Drummer Sprague alternates between a lock-step driving pace on opener “Hurt Somebody,” a bouncy girl-group groove on “Day by Day,” and the lazy gallop of the languid “Star Bird,” which he also sings. Bassist Denardo falls easily into all of those pockets and takes his own turn on lead vocals on “Down the Line,” a dusty roots-pop tune as laid back as the men playing it. Lukens, who lends his direct, earnest vocals to the EP’s remaining three tunes, also provides the by-turns warm, slippery, punchy, and liquid keyboard lines that are the album’s bedrock. The founding trio is joined by Steve Selvidge (the Hold Steady), whose pointed, tasteful lead guitar leads are peppered throughout Midnight Palms but are perhaps most notable on the searing “Hold On To You.”

“The Donkeys have one of the chillest, coolest sounds you’re likely to find outside of a Jicks record… Pretty astounding to fans of sun, relaxation, and chiming guitars.” –The Line of Best Fit

“By the end of [my first Donkeys] set, I had a new favorite band. The sound was classic, calling on West Coast influences like the Grateful Dead and Crosby, Stills, Nash & Young. There was also a note of the wry shambling of Pavement, with the democratic makeup of the Band… They were loose in the right spots and tight when they should be… It was glorious.” -Craig Finn (the Hold Steady)