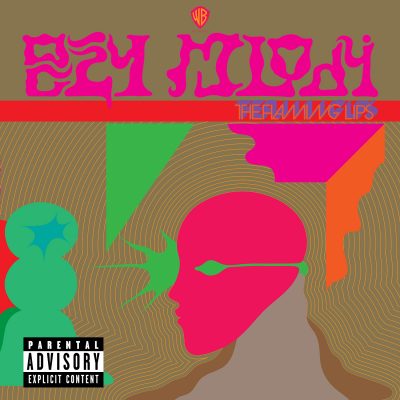 Oczy Mlody, the highly-anticipated new album from The Flaming Lips, is here. Three-time Grammy Award winners, the band is one of the most enduring, influential, unpredictable, and universally-respected groups of their generation or any other. They have been cited as the ultimate live attraction and life-affirming festival band who continue to dazzle audiences with their over-the-top, maximalist, high-energy onslaught on the senses. Produced by longtime Lips collaborator Dave Fridmann, Oczy Mlody follows 2014’s With A Little Help From My Fwends – a star-studded track-for-track tribute to The Beatles’ Sgt. Pepper’s Lonely Hearts Club Band that featured special guests My Morning Jacket, Miley Cyrus, Moby, Phantogram, Tegan and Sara, and many others – and is the Lips’ first full LP since acclaimed 2013 release The Terror. On Oczy Mlody, the Lips return to form with an album that is as experimental in nature as their recent output while making welcome aesthetic nods to the best and most melodic parts of their more song-oriented, and critically-applauded, albums The Soft Bulletin and Yoshimi Battles The Pink Robots.

The Lips have long blended experimentalism with their considerable penchant for poppy melodocism, and Oczy Mlody expertly balances these elements to create an overall impression that is both moody and hopeful. While the soundscapes on tracks like “How??” and “There Should Be Unicorns” are dark, the shimmery arrangements of “Sunshine” and “The Castle” evoke a child-like innocence and sunniness. Final track “We A Famly” includes an otherwordly guest vocal from Miley Cyrus, who has emerged over the past few years as one of the Lips’ most frequent and joyful collaborators.

“[On Oczy Mlody, the Flaming Lips have] managed to meld together the grand themes of The Soft Bulletin and Yoshimi Battles The Pink Robots with some of the experimentation of Embryonic and The Terror, and it makes for a fascinating return.” –Clash Music

“Oczy Mlody stands clearly as a curious thing of its own, a masterstroke of rhythm and tone that neither trips head-on into bliss nor spins into dismay… This album is… unassuming and exploratory, trading sonic bombast and maximalism for intriguing musical patterns that repeat across songs, fade in and out with irregularity, and seem to discover themselves in the arithmetic of their own unfolding.” -Slant Magazine